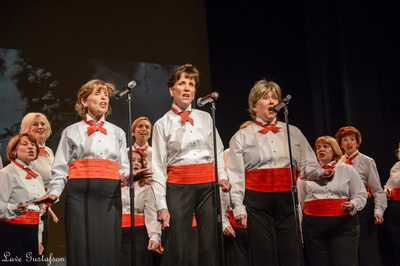 LITTLE HISTORY ABOUT THE GROUP

During a Trilogy Players social committee meeting, Trilogy Players members were brainstorming on putting together a choral group to perform within Trilogy and in the community.  In 2013, The Troubadours were born and have become an integral part of The Trilogy Players, performing during shows and representing us well within the Trilogy gates and out in the community. Kathy Ginis, Jan Crawford and Linda Wells, pictured above, serve as the musical leads and JoAnne Conner is the Public Relations Administrator. She scouts places for the group to perform and helps recruit new members while working with the musical leads to organize the group.

The group has done numerous holiday programs in 3 and 4-part harmony at veterans homes, assisted living homes and Faith House, a women's safe shelter.  They have performed the National Anthem at Peoria Sports Complex Spring Training games where they also lead the crowd in a rousing round of "Take me out to the ball game!"

The group's accolades don't stop there. They were honored to sing the National Anthem during Peoria Mayor Cathy Carlat's State of the City Address in 2015 and 2016 and hope to be invited back for 2017.

The Troubadours actively lend their beautiful voices to the holiday programs staged for the Women's Club, Memorial and Veteran Day Programs for the Veteran's Club, and last year they performed in "A Night at the Oscars" at the Peoria Center for the Performing Arts.

The focus of the group is to encourage choral stage art through rehearsal and performance in a fun environment. There is no audition requirement to join the group. Any dues-paying member of Trilogy Players is welcome to join during designated enrollment periods. However, at the discretion of any of the directors, a member may be asked to work one-on-one with one of the directors or a vocal coach of their choosing. Regular attendance will be encouraged. For specific performances, each member will be required to have participated in 3 of the preceding 4 rehearsals. As per the guidelines of the Trilogy Players, courtesy towards leaders and fellow members will be expected. Above all, be kind and encourage one another.